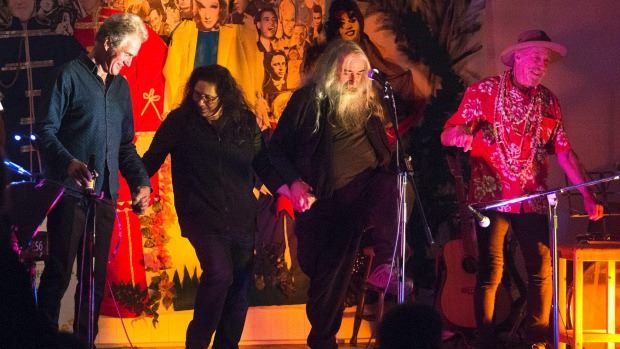 If you missed Michael In December, here is your chance to hear one of NZ’s finest poets reading to celebrate the launch of his CD, and a chance to purchase this beautiful CD, based on the poems from Livin’ ina Aucklan’, a rollercoaster ride through Auckland suburbs.
Sandra Bell will be providing music earlier in the evening.

Michael O’Leary, who lives in Paekakariki, holds a PhD in Gender and Women’s Studies at Victoria University, and has written 10 books of poetry, 5 novels, and non-fiction work as well as work in several art exhibitions. He runs a second hand bookshop specialising in rare and old books. He was born in Auckland in 1950.
In late 2015 he released an impressive and poignant CD of songs with …lyrics written from poems Livin’ ina Aucklan’, songs of the city by Earl of Seacliff’s Lonely Hearts Club Band a collaboration with number of musicians/collaborators from the Kapiti coast: Brian Romeril, Gilbert Haisman, Sean O’Leary, Al Whitham, Hilda Prasad, and others.
Publishing;www.earlofseacliff.co.nz
personal website ishttp://michaeloleary.wordpress.com
An earlier CD of songs based on his poetry called ‘Fences Fall’ is available for purchase on iTunes and atwww.amplifier.co.nz and “Livin’ina Aucklan’” is available from Powertoolrecords.co.nz

Sandra Bell is an Indie poet and musician from Dunedin with releases in USA, Belgium, France, Italy, Germany and NZ.

Open Mic: all welcome to read/perform