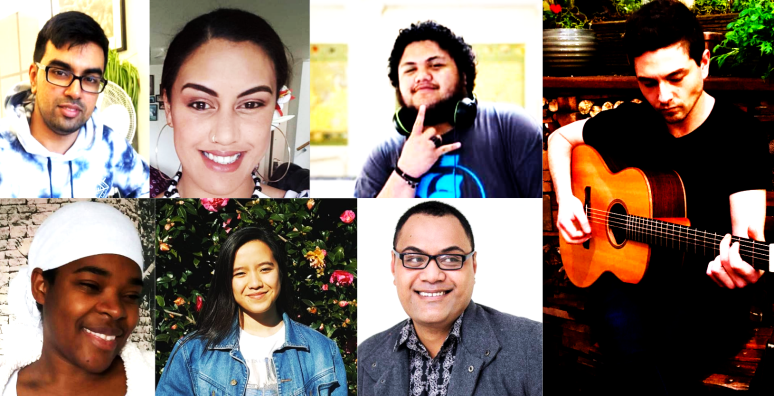 (Clockwise from top left) Azhar Khan – aspires to be an upcoming Indian version of Stephen King.
Cinta To`a is a performer and dancer as well as a writing student; she has an obsession for all things fantasy and bubble tea.
Damian Pereira is a dude from Mangere who has too much time on his hands so he writes, about family, friends and anything else that makes him feel something.
Gabriel Faatau’uu-Satiu is of Samoan descent, raised in Porirua, Wellington, but lives in Manukau. He is passionate about Pasifika storytelling and is an emerging playwright and screenwriter.
Kyla Dela Cruz is a performance and page poet. She appeared in the Auckland Theatre Company production, Mouth, Tongue, Teeth in 2017, won the 2016 Rising Voices Poetry Slam. When she’s not writing she is playing with her toughest little dog, Coco.
Tsitsi Mapepa writes poetry, fiction, and recently, journalism. She is a mother of three who loves the magic of putting letters together.
Marcus Hawkins (not pictured) – writes fiction and poetry. He has a Bachelor in Communications from MIT, and is currently making creative work with a marae-based group at MIT.

Our muso is Adam Ogle (holding guitar). Adam is an award-winning multi-instrumentalist. Progressing from playing in pubs in Whangarei to performing at festivals such as Prana and the Auckland Folk Festival. His first love is the guitar, but after being, somewhat forcibly, urged to pursue singing (thanks mum), has slotted into the singer/songwriter role.
Adam has composed music for theatre companies such as Auckland Theatre Company and Company of Giants, also touring around the world with Indian Ink Theatre Company.
Passionate vocals paired with intricate guitar work help Adam perform songs varying in genre from classic folk, old-time Americana, southern gothic, and bluegrass.